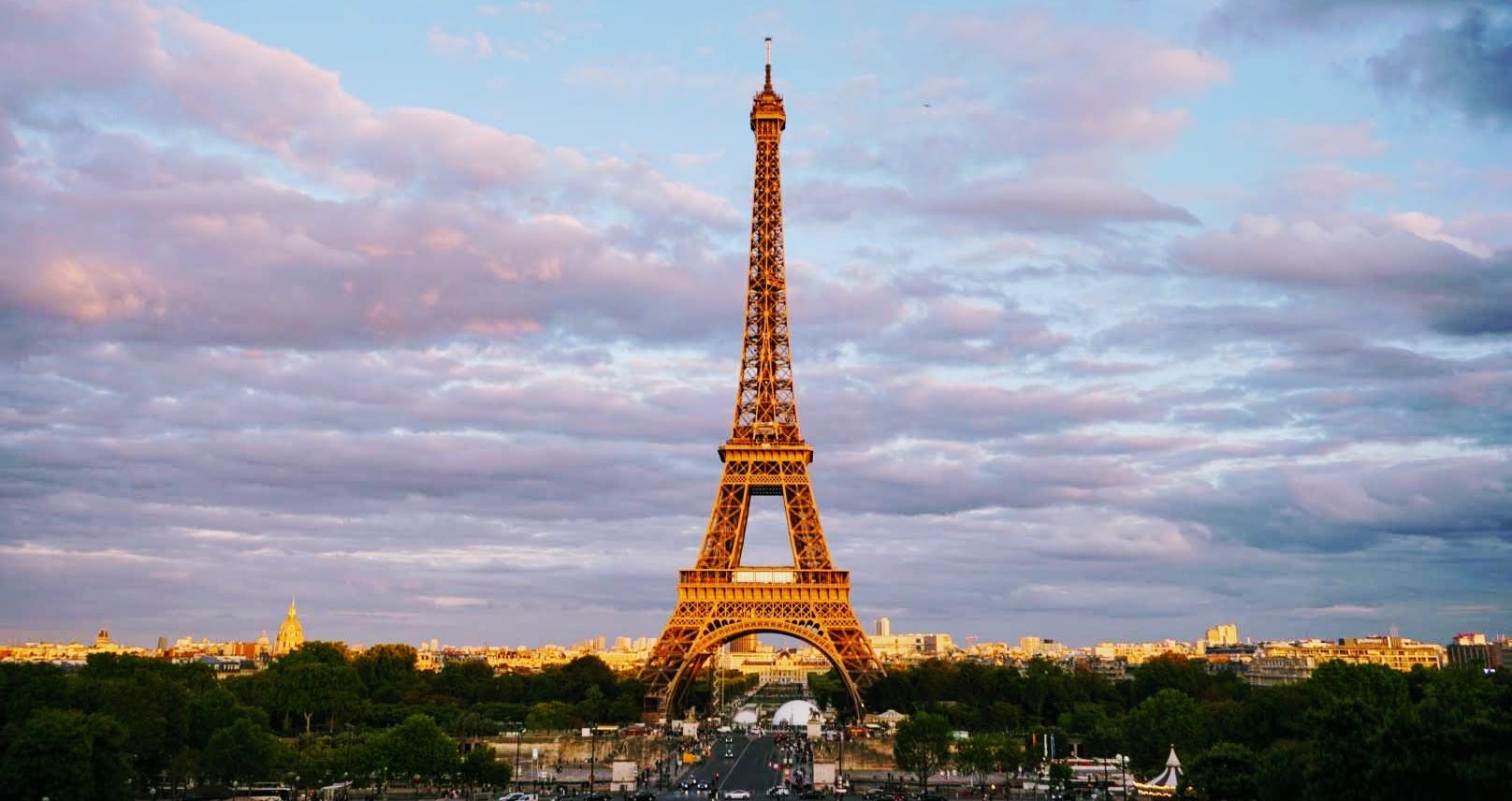 The most romantic city… I don’t know according to whom. A cliché and a reason to be very biased towards traveling to Paris, but I still decided it was a city I would like to explore. A banal destination where I did not have much hope that it would impress me in the way that everyone describes. I think I made a mistake in my judgment and my expectations were shattered. A gorgeous city, with a lot of magnetism and diverse faces. Paris turned out to be not just a romantic place, I found it to be a city that impresses with its architecture, leaving you breathless and with tired legs from walking around 🙂

Our trip to Paris wasn’t long, so we had a good organization of the sights we wanted to see, both by day and by region. Paris is not a small city and the distances there are not as in Rome and Milan between the sights. It was necessary to create a program that was consistent with the working hours of the places we decided to visit, as well as other small tricks and ideas, which I will tell you in the next lines.

Within 3 days we wanted to visit Versailles, the Eiffel Tower, to walk along the Seine, to see what is left of Notre Dame and how the renovation is going, and more… Arc de Triomphe, Champs-Elysées, Louvre, Montmartre, Luxembourg Gardens … As you can see, a very ambitious program for the real 2 and a half days we would spend in Paris. BUT! We succeeded 🙂 How? It depends on what you expect to see and what type of traveler you are. My husband and I don’t like going around museums, queuing, and contemplating art for hours. Rather, we are travelers who enjoy the city itself and its atmosphere, streets and architecture, so it was our secret to the success of seeing everything we planned.

Keep in mind that the palace and gardens are not in Paris, but are 40-50 minutes from the city center with appropriate transport. They are located in the city of Versailles, a suburb of Paris. The flight from Varna with Wizz Air is early in the morning, but keep in mind that while moving from the airport in Beauvais to Paris itself and check-in, half a day is lost. This fact, plus that the park and gardens are open every day and access to them is free, except on the days of the fountain show (which was not such a day), predestined us after our check-in to get on the transport and go for half a day to the Gardens of Versailles.

A wonderful place, which on a sunny one as the one we went to, reveals wonderful alleys, meadows, lakes, labyrinths of hedges, and all kinds of plant beauty. Created by the Sun King Louis XIV, the park is located on 101 hectares, remarkable for its many fountains and sculptures. To tour the Gardens of Versailles will cost you nothing but tired legs and hours of walking, but they are worth it. There is an option to rent a golf cart, with which you can go around the long alleys and not get tired if walking is not your passion. If you have decided to visit the Palace of Versailles, it would be nice to have bought tickets in advance from HERE, which are tied to the time of entry and you will have to adjust it to your visit as a whole. We decided to fill it that day with the gardens in motion and accordingly did not visit the Palace of Versailles. 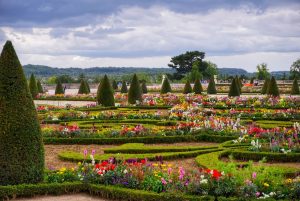 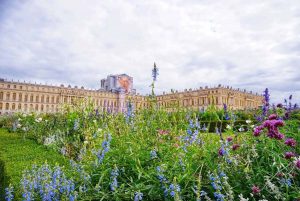 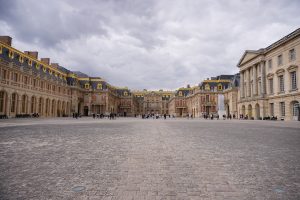 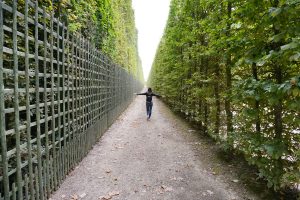 A walk in the gardens of Versailles 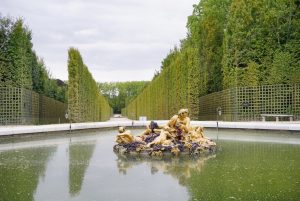 A walk in the gardens of Versailles

The tour there filled our whole afternoon and we decided to come home on time, tired enough, but also to recharge for the new day, full of places we wanted to see.

BUT! Sunset was yet to come, we are in Paris… how can we not go to enjoy the Eiffel Tower just after sunset, and even wait for its lights to light up?! Of course, we did – from Versailles, we traveled directly to the Eiffel Tower in the hope of catching the perfect moment. And luckily we managed to admire her during sunset, and exactly at 21:00. they also turned on its lights, a fabulous sight that would excite even the most non-romantic nature. It is worth “calculating” your trip around Paris and spending time at that time around the Eiffel Tower. 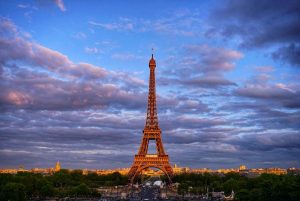 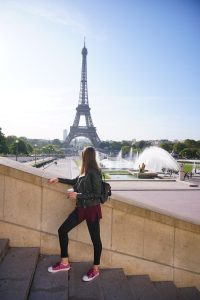 Cappuccino in front of The Eiffel Tower in Paris 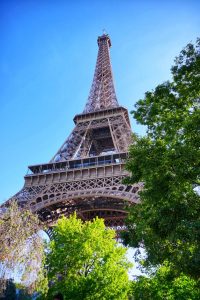 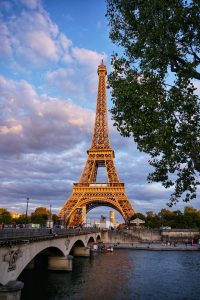 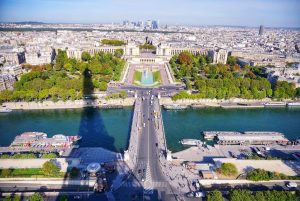 View from The Eiffel Tower in Paris

View from The Eiffel Tower in Paris

I have already mentioned that you cannot be in Paris and not tempt to see the tower. At any time of the day, the Eiffel Tower sprays its charm and power as a unique structure. Its height is 324 m, one of the most popular symbols of Paris and France in general. It was built by Gustave Eiffel as the entrance arch to the World’s Fair in Paris in 1889. It is also the most visited architectural monument in the world.

The tower has three levels that are accessible to visitors. The ascent to the first two levels is by stairs or an elevator. The staircase to the first level, as well as the one from the first to the second level, has over 300 steps. The highest level can only be reached by elevator. There are also restaurants on the lower two levels. The access to the Eiffel Tower is highly regulated, due to the huge flow of tourists and to be able to see all three levels it is good to buy tickets in advance from HERE. I recommend that this be done at least 2 weeks before visiting the tower – tickets for the last level are limited and end very quickly. Again, it is good to keep in mind that the entry takes place at certain hours, and with a pre-purchased ticket, you save time.

Important note: If you still have not bought a ticket online, it is good to know that tickets on the spot are purchased individually, that is, you can not buy a ticket for yourself and take separately for a friend. This friend has to buy the ticket personally 🙂

I could not buy tickets for the top level of the Eiffel Tower, as there were no seats left for the day we wanted to visit it. I’m sorry about that, but I promised myself next time. So, think about tickets early! Despite everything, we managed to climb the Eiffel Tower around 10:00. Beautiful, huge, and charming. Be sure to drink coffee with a view of it in the late morning, and when you go up to the second level, get macaroons, deliciously fresh and… French!

Walk along the Seine

A fabulous place that is worth the walk and tranquility. You can also take a tourist boat ride, there are piles that offer various walks on the Seine. We decided to walk and see some of the bridges that were on our way.

On the way to the Louvre

We had not planned to go inside, but only to look around, because the information I had was that 1 day would not be enough for us to tour the largest national museum in France. We enjoyed it outside, sat by the fountains and of course the glass pyramid in front of the museum. We visited the cultural center, which is located near the Arch in front of the Louvre and is interestingly dug underground. There we encountered the inverted pyramid, which turned out to be as attractive to visitors as the upper one. 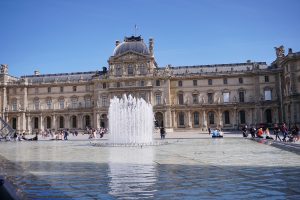 The fountains in front of the Louvre 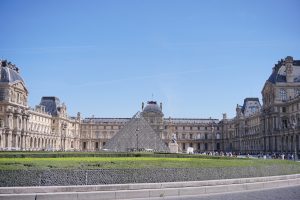 The Louvre in Paris 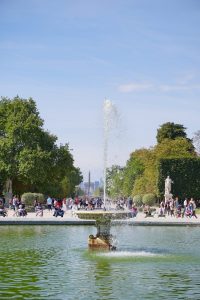 Fountain in the Tuileries Garden 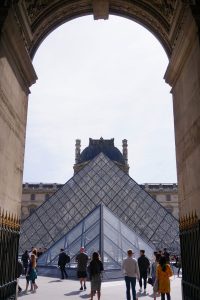 The Pyramid of Glass, the Louvre 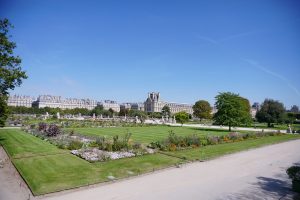 The Tuileries Gardens, the Louvre 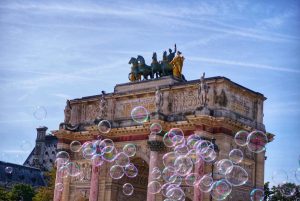 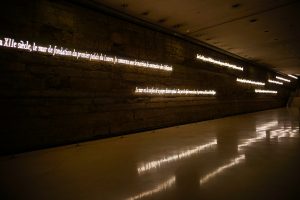 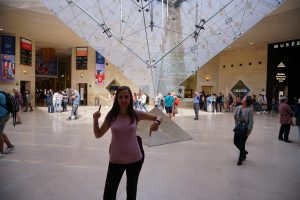 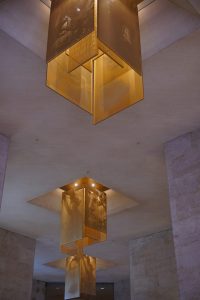 Tullery Garden is beautiful, the place where we ate sandwiches, surrounded by fabulous flowers, tranquility, and people stretched out on chairs and loungers, also enjoying the fabulous sun.

So if you are not a fan of paintings and sculptures, which we are not, you can take advantage of another type of “tour around the Louvre” and feel the French atmosphere.

We could not miss these two emblematic for Paris tourist destinations. If you look straight ahead from the end of the gardens in front of the Louvre…. Yes, that’s right, all along the Champs-Elysées, you will see the Arc de Triomphe. Don’t be fooled, the boulevard is far from being as short as a route, it’s just that the streets in Paris are deceptively straight and long – you see the final destination, but your feet feel that you are not close yet. About 3 km and an hour later, because of the stops on the famous boulevard and the examination of shop windows and buildings, we managed to cross the Champs-Elysees.

By the way, an interesting thing we came across was an exhibition of different designers, on the occasion of the 80th anniversary of the creation of the Batman comic, which tore us a little from the Parisian atmosphere and took us to favorite movie moments. 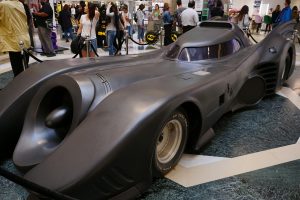 Arriving at the Arc de Triomphe, we found that the circular motion around it was dizzying, and crossing to get under it was a task of increased difficulty. The first rule – do not follow the crowd – it passes from where their eyes see… some tourists are quite suicidal because of the perfect photo! The second rule – look for footpaths and just use one of the two subways.

The safe movement to the arch also revealed wonderful views, but also made us realize how huge and majestic it is. I was not prepared for such a close shot with such a huge architectural facility. This did not prevent us from enjoying it with our eyes and standing under it. There had an awards ceremony just below the arch, which caught our attention. For visitors who intend to mention that you can climb to the top of the arch. There is an elevator that takes visitors almost to the top, to a small attic, which is a museum, and from there to the panoramic terrace you are about 50 steps away. Make sure that you buy your tickets on time from HERE, because the flow of tourists there, and the boarding, as you can already guess, takes place in controlled groups at certain hours.

No, the tour is not over, but I decided to divide it into two parts so as not to get tired of the long walks around the French capital. Also, will share some useful tips in the conclusion.